Physiology: The Force Behind Healthcare Simulation – A Guide for Techs, Part 10: Intro to Cardiac Rhythms 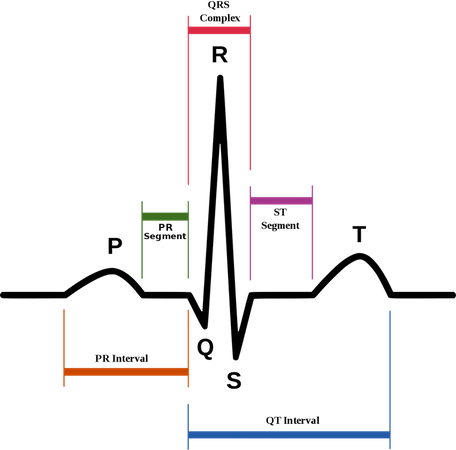 Next, let’s take a look at electrical systems in the heart!

Electrical Conduction System of the Heart

The components of the cardiac cycle can be visualized on an electrical recording of the heart. When surface electrodes (leads) are attached to the skin, electrical activity in cardiac cells can be collected, integrated and displayed on a screen or printed on paper. The original work was developed by Walter Einthoven who described a triangle of activity around the heart (Einthoven’s triangle). For a full ECG, 12 electrodes, attached at various points around the body, measure the sum of electrical charge moving from one EKG lead to another. Lead one, for example, attached to the left arm lead is designated as positive while the right arm lead is designated as negative. When electrical signals move towards the positive lead, the electrical wave moves up from baseline and when the electrical signal is reversed the wave moves in the opposite direction. Basic analysis of ECGs looks at movement away from the baseline either up or down and the distance between the waves.

Intervals: An interval is the length of a particular wave plus the isoelectric line that follows it; the length of the interval ends when another wave begins. The internal is named using both of waves on either side. Note Intervals contain waves.

Segments: Baseline between the end of one wave and the beginning of the next wave. Segments are always straight:

Simple Analysis of ECG: The ECG is printed on specially marked paper where the horizontal axis represents time with each small block = 0.04 sec and each large block (with 5 small squares) = 0.2 seconds. The vertical axis represents voltage.

Additional Reading: How To Read An Electrocardiogram (EKG/ECG) from Nurse.org

Subscribe now for future articles will cover various dysrhythmias and more details about the 12 lead ECG! Physiology: The Force Behind Healthcare Simulation – A Guide for Techs, Part 10B: Heart Blocks
Featured Articles