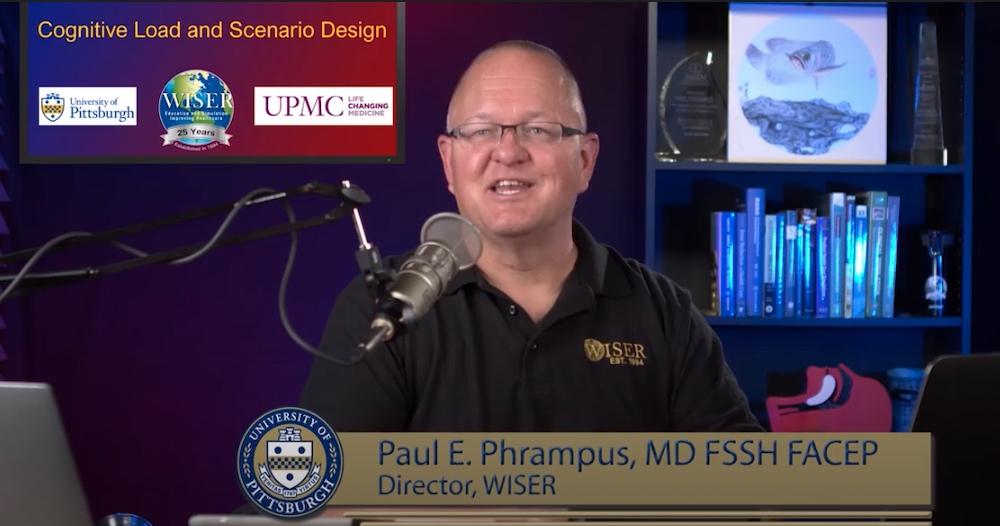 Dr. Paul E. Phrampus, FACEP, FSSH, is the Director of UPMC’s Peter M. Winter Institute for Simulation, Education and Research (WISER Center), as well as a Professor in the Departments of Emergency Medicine and Anesthesiology of the University Of Pittsburgh School Of Medicine and Medical Director for Patient Safety at UPMC. Sharing his passion for clinical improvement through simulation, Dr. Phrampus also produces content for his blog Simulating Healthcare — which provides helpful insights on a regular basis. Today, we take look at three of his latest healthcare simulation videos which cover orientation, debriefing locations, and cognitive load in simulation scenario design.

Paul writes, “In this article I want to explore a little bit about orientation and prebriefing associated with simulation based education design concepts. I think it is essential that we as the faculty are establishing a relationship with our learners and begin to establish trust and mutual respect. To that end, we can use orientation to minimize surprises. Adult learners do not like surprises!  We need to have the adult learner understand what they can expect. I always orient the learners as to what will feel real, and I am similarly honest with them about what will not feel real. If they will be interacting with a computerized simulator for example, I orient them to the simulator before the start of the program.

In the simulation world we throw around words like debriefing, scenario and task training. To clinical learners these terms may be unfamiliar, or have different contexts associated with them. This for example, can cause anxiety and during the orientation we need to walk them through the experience they are about to embark upon.

Some factors can influence the amount and depth of the orientation. Variables such as the familiarity your participants have with simulation, your simulation center, and your simulation-based encounters. For example, learners who come to your center on the monthly basis probably need less total orientation than those who are reporting for the first time. Learners familiar with the fact that debriefings occur after every simulation may already be acclimated to that concept, but people coming to the sim center for the first time may not be aware of that at all.

Participants just meeting you for the first time they might need a little bit more warming up and that an come in the form of orientation. Overall though it is not just about telling them what’s going on, as it is using the opportunity toward earning their trust and confidence in the simulated learning encounter(s) and the value associated to them as a professional.” Read Paul’s full article about Simulation Orientation.

Where Do We Debrief? Considering the Importance of Debriefing Locations

Here Paul reminds us that “selecting the location to conduct the debriefing after a simulation is a decision that often has many variable. Sometimes there are limited choices and the choice is dictated by what is available, or what space holds the technology that is deemed essential to the debriefing. Other times there is deliberate planning and selection. This short video explores some of the basics of how such decisions are made and some of the pros and cons associated with the final choices.”

Paul explains in this article that “as the design architects of simulation scenarios, we must remain cognizant of our ability to have influence over the cognitive load of those experiencing our simulations in the role of learners. When we design simulations for our learners, we are creating similar environments noted above that demand a significant amount of cognitive workload to be endured for the participant to successfully navigate the case and care the [simulated] patient. In addition, I argue that we are adding additional cognitive workload by subjecting someone to the simulated environment insofar as they are engaged in a conscious or perhaps subconscious pursuit of deciding what is simulated and what is not.

It is important that the decision is made during the design of the case that allows the participant(s) of the scenario to focus the appropriate cognitive spend on that which the designers of the scenario feel are most important. In other words, if it is part of the learning objectives that the participant should evaluate the actual values of the basic metabolic profile, then of course it would be appropriate to provide the requisite information at that level of detail. If, however, the results of the same test are perfunctory to the bigger picture of the case then one should consider a different mechanism of resulting values to the simulation participant.

A common misperception in the design of healthcare simulation scenarios is to try to re-create the realistic environment of the clinical atmosphere. While this is always a tempting choice, it is not without consequences. It comes from the mistaken belief that the goal of simulation scenarios is to re-create reality. Modern, successful simulationists need to recognize this outmoded, immature thought process.” Read Paul’s full thoughts on Cognitive Load on Scenario Design.