A HealthySimulation Launch Exclusive: IMSH 2018 Opens Now with already a huge bang — as SynDaver launched the show with the announcement of the acquisition of Lifecast Body Simulation — a company that is less than a year old! From the same team who brings us MDT Technologies, the unmatched realism of Lifecast Body Simulation manikins was too enticing for SynDaver not to make a direct connection with the UK-based company.

Lifecast Body Simulation skins, built directly from 3D scans, have created a new bar for realism within the healthcare simulation industry. Some have said, their manikins are like “looking at something from a real life movie!”. This is because the team includes an Oscar winning Creative Specialist whose worked on special effects for films such as Gladiator, Saving Private Ryan, Kingsmen and Beauty and the Beast.

SynDaver has already implented Lifecast Body Simulation technologies into their product line, with the complete reskinning of the Airway Head — adding a new level of patient simulation that will be trend setting for years. Check out the full press release below and while visiting IMSH, come check out the SynDaver group at Booth #839!

The exact terms of the deal were not disclosed, but by acquiring Lifecast, SynDaver plans to combine both companies’ capabilities to create ultra-realistic, next-generation synthetic bodies. Future human and animal models engineered by SynDaver will combine the fully-functioning anatomy and life-like tissues of SynDaver Synthetic Humans, with the movie-ready realistic visual appearance pioneered by Lifecast.

“We’re excited to kick off 2018 and the International Meeting on Simulation in Healthcare with this announcement,” said Dr. Christopher Sakezles, founder of SynDaver. “The SynDaver Synthetic Humans of the future will undoubtedly be the most realistic synthetic bodies ever developed, both inside and out, and will help to save countless human and animal lives as a result.”

The new synthetic models developed will closely visually resemble and function similarly to real human and animal bodies. These models can be used for medical research, training and engineering research, replacing the need for testing with animals or human cadavers. Other uses will include, film production, automobile crash testing, ballistic testing and more.

“This acquisition not only formalizes a commercial framework moving forward, but also brings two teams together who have the same passion, ethos and vision to push the boundaries of medical simulation,” said Rob Clark, co-founder of Lifecast Body Simulation and the new vice president of international business for SynDaver.

About SynDaver
Headquartered in Tampa, Florida, SynDaver is the world’s leading manufacturer of hyper-realistic, synthetic human and animal surgical trainers. SynDaver’s synthetic bodies simulate fully-functioning live organisms and are primarily used for training in schools, hospitals and military installations. SynDaver has the world’s largest database of live-tissue properties and all SynDaver tissues are made from water, salts and fibers. The company currently has 10 patents on these materials, processes and related products. Currently, SynDaver employs more than 100 people at their Tampa facility and is planning additional facilities in the U.S., China, Europe and Latin America.

SynDaver products have been lauded by industry experts and earned a cult following after appearances on ABC’s Shark Tank, MythBusters, Grey’s Anatomy, and the series finale of CSI. The company’s models are also expected to feature prominently in multiple episodes of the upcoming MythBusters 2.0.

Located at Elstree Studios in Borehamwood, London, Lifecast Body Simulation specializes in developing highly accurate and life-like human manikins for a variety of specialized industries. Lifecast manikin models provide maximum visual realism, with a minimum of technology, and are available in a range of forms, from new born babies to elderly adults.

Lifecast began as a partnership between seasoned paramedic educators, Dave Halliwell and Rob Clark, and visual effects artists John Schoonraad and Tristan Schoonraad. The visual realism of each Lifecast manikin is inspired by John Schoonraad’s previous experience with make-up, prosthetic and special effects within the film industry. Schoonraad has worked on award-winning films like Gladiator and Saving Private Ryan, and with celebrities like Russell Crowe, Tom Hanks and David Bowie. 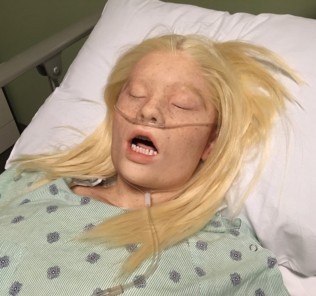